Though my interest in uncovering stories of LGBTQ ghosts and hauntings goes back a few decades, my pursuit of those tales and allegedly-haunted LGBT-owned businesses began in earnest around 2008 while I was still predominantly focused on local (straight) hauntings. I began to slowly uncover dozens of businesses that weren’t too timid to admit that they may have a ghost. But sadly, over the past decade, not all of these businesses have thrived. Countless gay and lesbian bars both across the US and around the world have been permanently shuttered. And in the case of hotels and bed & breakfasts, many have closed or changed hands.

These are just a few of the businesses I’ve written about or researched over the years which are either currently out of business or are no longer owned by individuals who self-identify as LGBTQ. 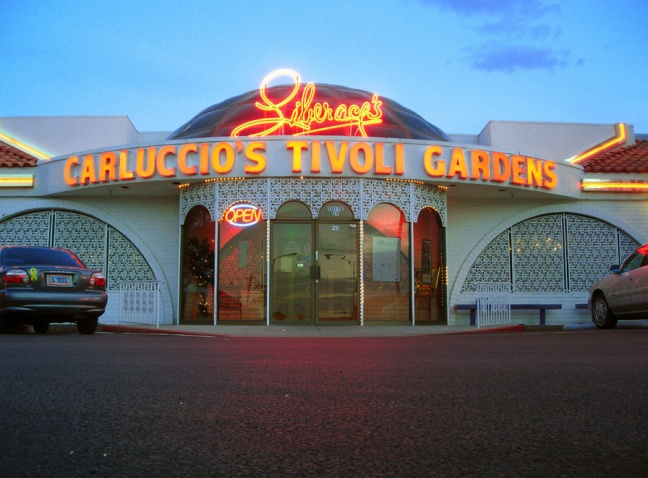 Opened by the flamboyant pianist himself as Liberace’s Tivoli Gardens in 1979, this Vegas landmark attracted diners for decades after his piano fell silent when Liberace died of AIDS-related pneumonia in 1987. But Lee—as his close friends called him—seemed so in love with his restaurant that even death couldn’t keep him away. Guests and staff reported regular unexplained activity (and a few quick glimpses of his sequinned cape), often triggered by gay jokes directed at the performer. In 2011, the restaurant moved 10 miles away to a new location, leaving the property vacant. After a failed attempt to crowdfund a re-imagining of the restaurant as The Candelabra,  a Russian restaurant opened in part of the building.

The Grill – Mine Hill, NJ

Anyone from Mine Hill can tell you that the old 1868 Cox Hotel has had a long and colorful history, though its years as Maddie’s Mine Hill Tavern left more than just a memorable impression on the place. It became an unlikely watering hole for gay men and lesbians by the 1960s thanks to Madeline Bellini and Maureen, her partner in every sense of the word. Following Maureen’s death in her upstairs apartment in 1993, she became another of the rumored ghosts haunting the inn. The tavern’s last incarnation as The Grill opened in 2004 but barely lasted a decade, leaving the property vacant once again. It was still empty in 2016 when someone crashed their car into it, severely damaging the historic structure.

This particular haunted bar (now torn down and relocated) is near and dear to my heart; I worked at Cocktails for a few years around 2001. Even then, stories of a former patron named Karen who was fatally struck by a car out front were whispered about. One former bartender ran from the building while closing out one night alone after seeing crumpled-up napkins repeatedly being thrown down the stairs while he was counting out his register. Long before becoming a bar, the brick building served as dormitories (possibly for Firestone Tire & Rubber Company) in Akron. Karen was a friendly spirit among the spirits until her home away from home was razed in 2016 for freeway expansion.

Hailed as Philly’s oldest gay bar/restaurant, the Venture Inn was located in a historic 1830s building on a street steeped in Colonial history. It once served as a station on the Underground Railroad, and its cellars helped conceal illegal liquor during Prohibition. Its recent history was one of a typical gay bar with weekly drag shows, yet its unusual ghost might’ve been better-suited for a leather/fetish/kink bar instead. Dubbed “the Bastinado Ghost,” its female spirit was best known for striking patrons with an invisible cane on the bottom of their feet: an old form of punishment known as ‘bastinado‘. (More frightening than this sadistic female spirit was the stabbing of a bartender and police officer outside in 2014.) Sadly, the bar closed in 2016, but you can still read about it’s fascinating history and pay its walls a visit if you’re in the gayborhood.

Some of you may have watched Season 5 Episode 4 of Ghost Hunters (titled “Club Dead”) back in 2009 when the team went to Ybor City, Florida, to investigate the former Trelles Clinic built in 1904. The owners mentioned plans of opening a “spa” at the site, but what was completely left out by the production company was that this was a polite way of saying “gay bathhouse”. Ybor Resort & Spa opened just a few months after the episode aired, but its possible ghosts were the least of its problems. Plagued with financial difficulties in a time when bathhouses were waning in popularity, Ybor Resort made the headlines in 2012 when they controversially invited Republican Convention delegates to stay there for free. But it wasn’t enough publicity to save the business; the bathhouse closed in February 2017. Two arson fires within one week the following month destroyed the entire structure. A new building is under construction on the original site.

With the changing physical and social landscapes, there will undoubtedly be more vanishing haunted landmarks in the coming years. So much of our history (and its ghosts) are lost every year to dilapidation and urban renewal projects. And the sanctuary of gay bars is lost on younger generations who feel more openly accepted in society today. Yet as these safe spaces and relics of our past fade into the ether, so do their ghost stories.

And ghost stories are one way we have of preserving legends and biographical snippets that otherwise would be forgotten by time. Regardless of your belief in an afterlife or the phenomena we call hauntings, we can all enjoy the fascinating glimpses into the past that strange tales such as these provide us. Our LGBTQ+ history is vastly unknown and constantly being written. Uncovering the stories behind places such as these helps broaden our views of our own community.

This site uses Akismet to reduce spam. Learn how your comment data is processed.